The two sides of the Electoral College: Students debate over this polarizing political system 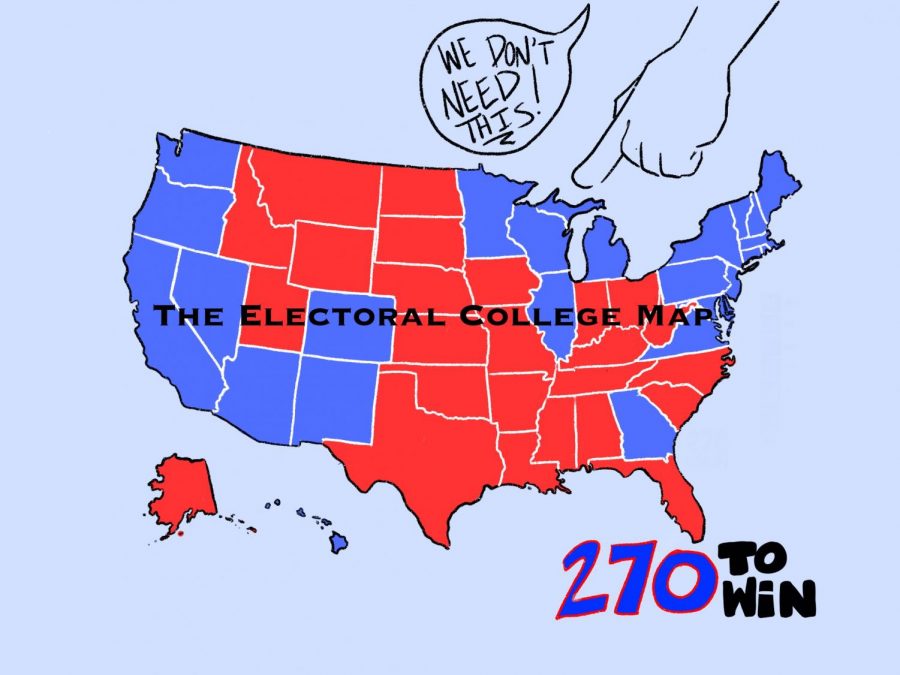 Many students believe that we do not need the Electoral College in a presidential election.

Why we should not have an electoral college

Ever since its creation in the sixteenth century, the electoral college has been a point of contention in American politics. Ask anyone their opinion on the matter, and you’re bound to hear different results. In the 2020 presidential election, this age old debate on the necessity of this institution is as present as ever, but in today’s society, there is truly no longer a need for such an this outdated system.
“The function of the electoral college is outdated[,] as it was initially intended to balance out the voting rationale in an American era where not all citizens were effectively politically educated. However, the present day has public education where political literacy is much more accessible, and so standard popular voting holds much stronger integrity where the electoral college no longer needs to keep in balance,” Zander Vilaysane (12) said.
A quick summary: the electoral college is a body of electors for each state (whose numbers proportionally represent that state’s population) who cast their votes in presidential elections. The first candidate to win 270 electoral college votes wins the election, regardless of the popular vote results, generally. This system was created because the founding fathers were apprehensive about giving the voting power to the uneducated majority, in fear that they wouldn’t know how to make smart political decisions. To placate those fears, the electoral college was established.
“The way the electoral college delegates votes to the states inherently undermines democracy in the nation. A state is given 2 votes for statehood, and the rest are determined off population. This creates an issue however[,] because low populous states will have greater electoral power due to those two given votes…We’re all familiar with the quote ‘We hold these truths to be self-evident, that all men are created equal,’ so why is it [that] we don’t have equal voting?” Matthew Rosen (12) said.
The electoral college system gives immense power to swing states, making their votes more significant than states cemented in their party affiliations like California. Still, it can be argued by some that this imbalance can be considered positive, ensuring representation for states that wouldn’t have the population to do so.
“I think the electoral college should still be used in presidential elections to promote an equal representation of opinions across all political parties and states. The purpose of the electoral college is to divide the single presidential race into 50 smaller ones within the states. Without this system, states like Idaho would be drowned out by higher populous states like California, thus creating an unfair race,” Harrison Blacklock (12) said.
There is still the argument that this historic institution has its merits. It protects less populated states from having their votes rendered useless. The argument believesis that the large states aren’t the only ones who should have a say in the presidency.
“The reason so many people like the electoral college is because they’ve been tricked into thinking that their vote will be suppressed otherwise…Getting rid of it, if/when that happens, would actually open up more avenues for the American people to elect a president that the majority of Americans, like how a democracy is supposed to work,” Jay Costales (12) said.
Being a large part of every U.S election since the beginning, the electoral college system doesn’t look like it’s going anywhere anytime soon. Nonetheless, the modern day election process truly has no need for the electoral college. It is a both outdated and unbalanced system that compromises the democratic process of the United States. 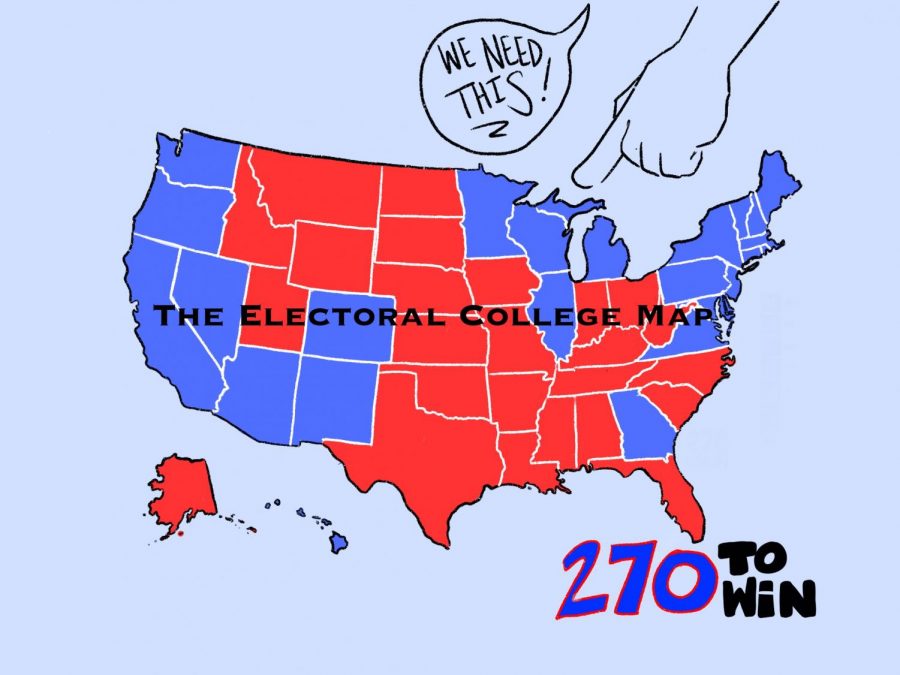 Many students believe we do need the Electoral College to ensure a fair presidential election.

Why we should have the Electoral College

American politics have always played a divisive role in the once casual conversation, especially when the existence of the electoral college gets shoved into the spotlight. Following the 2020 election, the argument on the true purpose of the electoral college continued as many began to question the system. It’s true, the electoral college is very complicated, but in the current fragile political state, we’ve never needed the electoral college more.
“The electoral college is important because it gives the general population of each state representatives to vote on their behalf. Most electoral votes align with the popular votes of the state that they represent. This is important because using the electoral college system, an election won’t solely be based off of congress or the popular vote, allowing representation while following the general stance of the public,” Brooklyn Esposito (11) said.
The electoral college is composed of 538 total electors with each state having as many electors as their combined total of senators and representatives. Each year they come together to decide the fate of each presidential election. The first candidate to reach 270 electoral votes (50.19% of the electoral votes) wins the election regardless of the results of the popular vote, as seen in the 2016 election. The system was instituted in fear that too much democracy would mean that the American people would not be able to make smart political decisions.
“The majority of voters were uneducated when the college was put in place and the electoral college served as an intellectual filter for what political choices would be made. Nowadays, I feel like a popular vote would be better since there are way fewer uneducated citizens and an enormous increase in schooling and literacy…I understand that it was also put in place so that small states wouldn’t be drowned out by the bigger ones, but you also have to consider how weird it seems now. It makes no sense that an electoral vote from a more rural state with a smaller population that represents fewer people has more power than an electoral vote from a more urban state,” Audrey Gutierrez (11) said.
Although the electoral college is popularly thought to give an extensive amount of power to competitive states, otherwise known as swing states, that can be won by either democratic or republican parties, the electoral college actually levels the playing field for the disadvantaged states. When population comes into thought, there is an immense amount of unfair distribution of votes in each state. Smaller groups like Iowa potato farmers and Wyoming oil worker votes would be trumped by California factory workers alone. The voter distribution keeps smaller rural areas from being marginalized and encourages all parts of the United States to participate in selecting the next president.
“Being that the nation is comprised of a large number of states at varying populations, without the electoral college smaller states would seldom campaign in or represent being that there wouldn’t be a large enough population to make much of a contribution throughout elections. Without the electoral college, however, smaller states provide anywhere from three to six electoral votes, motivating candidates to campaign and represent these smaller states as their votes would provide great value; therefore, the political values of each state is accurately reflected throughout an election and the general consensus/vote is fairly represented between smaller and larger states- a just and fair election is then created,” Alyssa Slater (12) said.
Ever since its creation, the electoral college has guided the United States through presidential elections, leading to America’s consistent dependency on the system. While there are currently 700 proposed amendments to modify or abolish the college, it’s unlikely it will ever be removed from our democracy. Our modern day election process calls for our old-fashioned electoral college. It’s not “outdated” or “unnecessary,” it is fundamental to the continuation of our fair and representative presidential elections.

The Silvertip • Copyright 2021 • FLEX WordPress Theme by SNO • Log in