The fast paced nature of social media makes it easy for fake news, echo chambers, and memes to spread and make light of serious domestic and foreign issues. 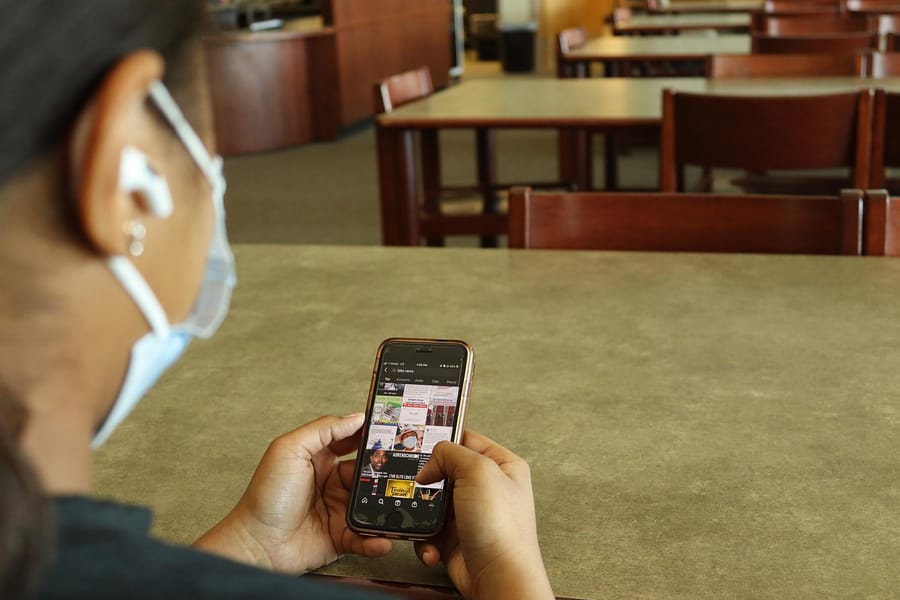 A Mission Hills student scrolling through their social media feed.

People used to rely on news sources such as channel news stations, websites, or newspapers to stay relevant. . Nowadays, while some people still rely on these outlets, social media has proved its overall rapid accessibility as it is only a quick click away to receive the latest, making it easier for others to be exposed and consume rather harmful tabloids. it is more common to click on social media apps to figure out and understand what’s happening around the world, and oftens harms or influences other people’s perspectives on serious issues happening in the world.
Posts on social media can often spread false information. For example, Twitter threads that are titled with “What’s happening in Ukraine” or “What’s happening in Palestine” are often spread around the platform without anyone actually checking if the information comes from a credible source.
“Social media has become a great place to gain information, especially since it’s a place teenagers can easily understand [and have] easier access [to], however sometimes it can be misleading. I think that with any type of news source and media it is important to teach teenagers how to do their own research or how to fact check a source,” said junior Brisa Jamie.
Along with spreading misinformation, social media is mainly a platformplace where memes are created. These posts gain more than thousands of views and likes and causes these types of content creators to want even more attention. This is why widespread jokes can come about whenever a serious matter arises.
Such posts can be seen with the situation in Russia and Ukraine from those who live in the United States. It is their way to “cope” with serious problems that have arisen in the world. There are popular Twitter memes and Tiktoks about being drafted into World War III, how the bomb explosions are aesthetic, and how the Urkrainian president, Volodomyr Zelenskyy, is attractive. People who post these “jokes” aren’t physically affected by the war, while people who live in Ukraine are the ones actually suffering as they have to migrate from their homes to be safe from danger. So what exactly are people making fun of the situation “coping” with?
This isn’t unique to the just the Russia and Ukraine situation, it happens with other serious problems too. When the COVID-19 pandemic began it’s surge, social media users found the pandemic comedic and decided to create a challenge called the “#coronavirus challenge.” This involved people licking the top of an ice cream jug and then putting it back inside the store for other people to use, or licking a toilet seat in order to catch the coronavirus. The #GeorgeFloyd challenge also popped up during this time where people reenacted the horrific video of George Floyd being murdered by a police officer, while chanting “I can’t breathe.”
These types of posts can show how insensitive people can be because they know that they are able to hide behind a screen. The fact that they are hurting people won’t matter to them as long as they’re gaining thousands of views and attention from people on social media, making them think that it’s okay to make these inconsiderate posts as it satisfies their need for attention.
“On social media there’s so much bias and fake news in which teens happen to fall into the bait and believe it. It sort of changes a students perspective on social media [because] they don’t take issues seriously. They [just] keep scrolling, ” senior Cristian Rodriguez-Carrillo said.
Teens shouldn’t look up to social media for the latest information on what is happening in the world. Social media posts can be detrimental and careless in how they react to current events which then oftens influences others to do the same. Too many people believe that the best choice for spreading information is to make it light-hearted and entertaining, while it should be told bluntly and in its entirety for the overall benefit of the entire community.