Marvel Studios Disney+ show ponders the question “What If…?”

"What If...?" dives into the multiverse of possibilities, exploring different outcomes of grand stories. 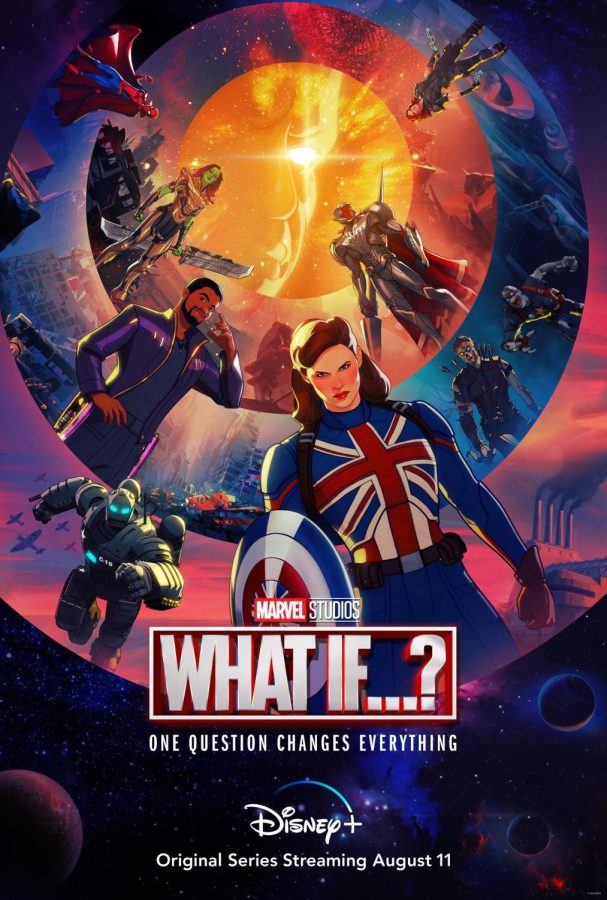 Marvel Studios entire first season of "What If...?" has aired on Disney+.

The new television show from Marvel Studios: “What If…?” has concluded its season finale. The final episode titled: “What If… the Watcher Broke His Oath?” is the ninth episode in the series and aired Oct. sixth. The series overall was an entertaining show and finished off with an amazing season finale.
“I think it was a good episode […], It’s [What If…?] a unique perspective on what happens when you change one little detail,” freshman Sean Guerrero said.
One amazing thing about the show is that they show alternate universes to characters from Marvel. They take already well established characters, and put them in a new refreshing story that keeps people hooked on for hours. “Doctor Strange was a trippy episode. I liked the zombie one too. I liked it because it reminds me of the comics. […] I just like how it relates to the comics more than some of the other episodes. They made the comics even before I was born! While my dad was here. It brings back nostalgia,” senior Thomas Nguyen said. The visual effects are stunning and there is a lot of color throughout the episodes! They are also not afraid to explore every scenario in each episode.
“I think the new villain idea is pretty clever. […] It’s unique because it shows how bad it could have been. It shows how powerful Vision could have become,” Guerrero said.
One flaw is that some of the stories feel rushed. If they only put more time into the story, they could have made the show a lot more realistic and better for the audience.
“Only flaw is like the heroes were able to beat up Ultron fast. Normal heroes took down Ultron in a short amount of time. It doesn’t make their powers feel realistic. They would have gotten clapped. […] Basically the whole problem is the realism of how a godlike being and mere humans is shown compared to one another,” Nguyen said.
Another flaw is that there are some episodes that stand out compared with some episodes that are a little weaker. It feels like a show with great episodes, and dull ones. There were many things throughout the show that left some parts unexplained. This left some viewers with questions while they were watching.
“It was nice seeing Thor and Loki getting along. […] It never explained how Loki became a giant. I didn’t really understand. It never explained it or the backstory more, I wanted to know,” Nguyen said.
The finale itself is a good conclusion to the first season. The episode was entertaining and had a good storyline. The fact that the viewers got to see other heroes from previous episodes team up was a nice twist added for the viewers to see.
“I thought it was going to be a normal show […] but it changes throughout the show. It’s not really normal. For example, the final episodes especially got crazy. It goes on to different multiverses and the power of Ultron shown was awesome. He felt the presence of The Watcher! That was crazy,” Nguyen said.
Season one is a great season with complex storylines and interesting characters. However, there has already been confirmation of Season two of “What If..?” coming out within the next few years. This came from Kevin Feige, the president of Marvel Studios, back in 2019.
“I think I’ll give it a watch. I think it might tie into the other tv show Loki,” Guerrero said.
“What If…?” and the entirety of the first season is available to stream on Disney+.