The Mandalorian and Grogu continue their adventures through the galaxy

The entire second season of "The Mandalorian" is available to stream on Disney+! 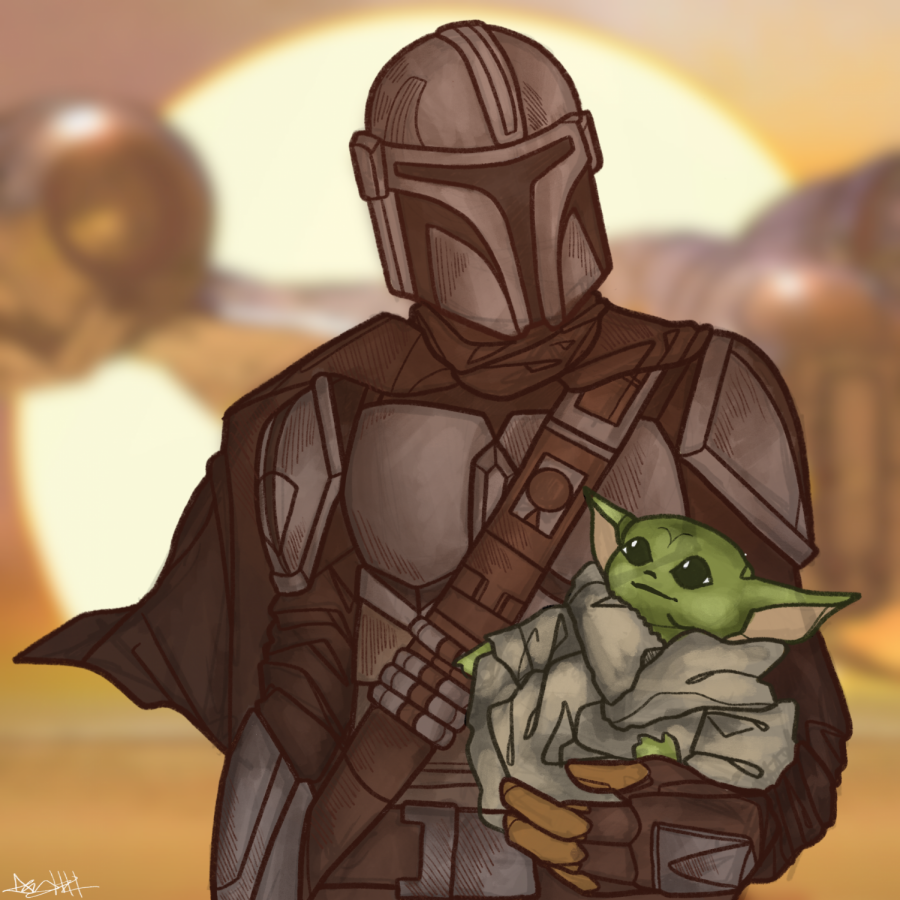 Mando and Grogu venture across the galaxy to return Grogu to his kind.

With its likable characters, intriguing plot and amazing cinematography, season two of “The Mandalorian” continues to delight fans and critics alike. The series continues the journey of the lone bounty hunter Din Djarin on his quest to return force sensitive ‘Baby Yoda’ to the Jedi. This series contains the perfect amount of action, humor, and emotion and an absolute must-see.
“As a major Star Wars fan, [I think] this series is quite a masterpiece. Baby Yoda (Grogu) was the perfect addition to this already wonderful show!” said junior Carly Childress.
Indeed, “The Mandalorian” season two received a whopping 94 percent on rottentomatoes.com. The adorable green alien Grogu definitely contributed to the high reviews as his personality continued to develop. In the first season, Grogu’s name wasn’t known, but his likeness to Jedi master Yoda and his childish features led him to being dubbed “Baby Yoda,” a nickname that’s stuck ever since.
In the second season, Grogu showed more of his mischievous and even troublesome personality when he swallowed a space spider and ate the eggs of an endangered frog-like creature, the latter producing some controversy on social media. In addition to consuming unsavory snacks, the child has also shown his tendencies to manipulate the dark side of the force when using his abilities, made evident when he force choked a group of stormtroopers after being captured. Regardless of his mistakes, Grogu’s innocent face and charming personality continues to steal the hearts of many.
The personality of the Mandalorian himself also continued to develop as well as his father-like relationship with Grogu.
“It’s no small feat to create a character who is well-rounded and sympathetic, while mostly hidden behind an expressionless mask. But all the credit goes to Pascal for imbuing the man, also known as Din Djarin, with layers of ever-present depth whether we see his face in every episode or not,” said freelance writer Zaki Hasan on datebok.com
Originally introduced as a cold and calculated bounty hunter, caring for the child has caused Mando to become more compassionate and likable overall.
Season two also contained the return of Boba Fett, Jedi Ahsoka Tano and a surprise cameo of Mark Hamill playing Luke Skywalker. The surprise appearances undoubtedly contributed to the show’s unpredictability.
In addition to having likable characters, the plot of “The Mandalorian” has gotten even better.
“Where Season 1 sometimes struggled to maintain a coherent arc, though, Season 2 has a higher-stakes narrative thrust that builds momentum more effectively,” said writer and author Rebecca Harrison on rottentomatoes.com.
With many climactic action scenes and emotional moments, the plot of the second season definitely makes this show well worth watching.
Additionally, the amazing cinematography of the show captures breathtaking views of space and pays homage to the diverse planets and creatures of the Star Wars universe. The scenes during the battle against the Krayt Dragon on the desert planet Tatooine bring back nostalgia for movies earlier in the franchise, and they fit right into the Star Wars universe. Overall, the creative cinematography absolutely made “The Mandalorian” an aesthetically pleasing and even more enjoyable show to watch.
Overall, Season Two of “The Mandalorian” continued to develop and improve the already amazing characters and storyline created in season one. This season was certainly a feast for the eyes and mind as it brought new aspects into the universe all while maintaining the classic Star Wars sentiment.