Recap of Board meeting vote on school reopening plan 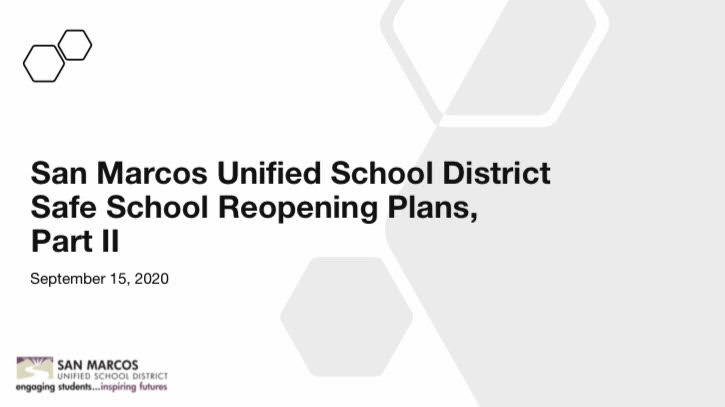 On Tuesday, Sept. 15, the San Marcos Unified School District (SMUSD) met via zoom to vote on the reopening plan for elementary and secondary schools. Parents, students, and staff have patiently awaited the future of the 2020-2021 school year.
As the meeting started at 6:30 p.m, board member Janet McClean informed the viewers that the SMUSD superintendent Dr. Carmen Garcia has stepped down from her position and will be leaving the school district. Stepping in for her will be the former Assistant Superintendent, Dr. Tiffany Campbell.
Before the voting took place, staff and parents had a chance to speak and tell the voting board members their views on the reopening of schools. Most speakers were very ready for schools to reopen and for their students to be able to finally go back to school.
“I think that it’s important for students to go back to school because not having social interaction like we’re used to is affecting our mental health in a negative way,” Anika Brown (9) said.
After all the guests had finished speaking, the different elementary and secondary school models were shown. Out of the three models that were presented for elementary schools, model three was the one that was unanimously voted on by the school board members. Model three would involve the A/B group system which would mean 1st to 4th graders go to school every Tuesday and Thursday or Wednesday and Friday based on if they are placed in group A or group B. In addition, kindergarteners would attend school in person Tuesday through Friday. Groups of students could be going back to school as soon as Oct. 19.
“I agree with A/B hybrid learning because it gives students a chance to get help from their teachers outside of zoom and still be safe from COVID-19,” Miranda Diaz (11) said.
For secondary schools the board members unanimously voted on model one. Model one, has group A attend school on Tuesdays and Thursdays while group B attends on Wednesdays and Fridays. Starting as soon as Oct. 19, small groups of priority students will be able attend school on the hybrid model. Full implementation of hybrid model one could begin as soon as January.
“I think that students should be able to go back to school earlier than January because the absence of being in person is resulting in the damage of students’ grades because they are not fully adapted to online school,” Julian Ceja (11) said.
After a survey, parents showed that they preferred the A/B hybrid model, but almost half of the parents that took part in the survey said that they think that it is too soon to reopen schools.