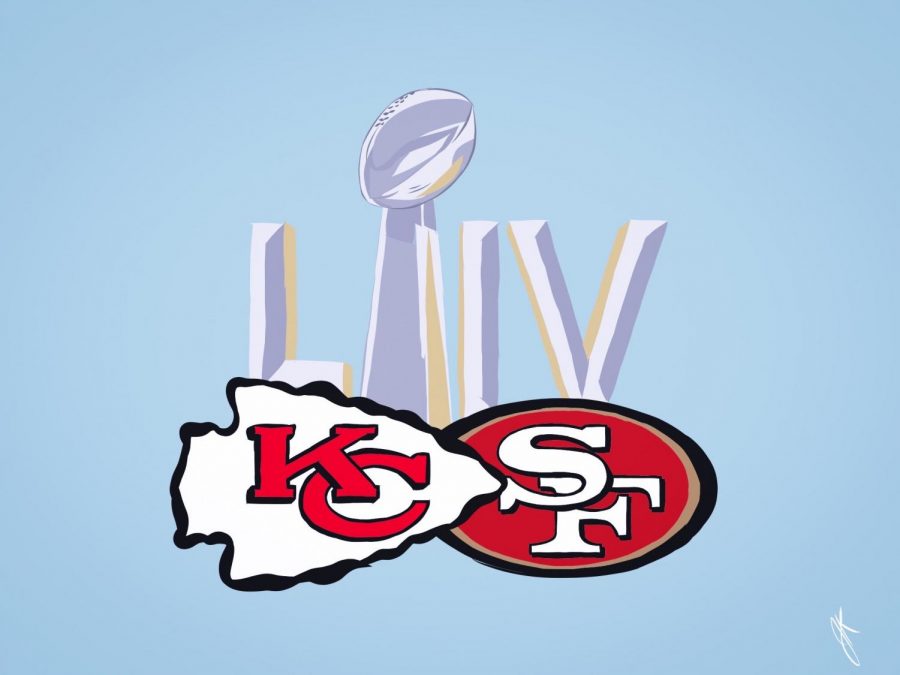 The Kansas City Chiefs defeat the San Francisco 49ers in the 2020 Super Bowl that took place on Sunday, February 2nd.

The biggest game in football ended in a ring for the Kansas City Chiefs, who soundly defeated the San Francisco 49ers in Super Bowl LIV. The Chiefs’ quarterback Patrick Mahomes, affectionately referred to by fans as the Patomic Bomb, marched his team down the field and led them to a 31-20 come-from-behind victory over the 49ers.
“I had been waiting for the Chiefs to make a comeback the majority of the game. They had been playing like this for most of the year, so I wasn’t entirely surprised when their score finally started creeping up on the 49ers. You just have to have patience with the Chiefs,” Olivia Miller, a Chiefs fan who lives in Kansas, said.
Accepting the Lombardi trophy was the pinnacle of the season for the Chiefs, whose unparallelled work ethic and determination paid off when they were crowned the Super Bowl champs for 2020. Since the hiring of quarterback Mahomes in 2017, the formerly mediocre Chiefs have turned into a powerhouse. The 24 year old Magic Mahomes took over the fledgling franchise and, through grueling gridiron grit, turned Arrowhead Nation into the victors of the biggest game in football.
The Chiefs earned the right to play in the Super Bowl after defeating the Tennessee Titans in the AFC title game, while quarterback Jimmy Garoppolo and the 49ers triumphed over the Green Bay Packers in the NFC championship. Quarterback Pat Mahomes and company were standout players throughout the regular season games as well as the playoffs. The dynamite finishes that both the Chiefs and 49ers had during their spectacular seasons were all the more exciting in the Super Bowl.
“Everywhere that the Chiefs Kingdom ‘rules’ is in red right now. Chiefs gear is selling like crazy! People are proud to wear their favorite Super Bowl 54 team wherever they go,” Miller said.
Following an explosive and hard-fought game, including a spectacular San Francisco interception by Mission Hills alumni Fred Warner, the Chiefs defeated the 49ers and Magic Mahomes was crowned the Most Valuable Player for his spectacular work as quarterback. Confetti swirled around the stadium as the Kansas City Chiefs donned their brand-new champion caps under the multicolored lights, which flooded the field in the winning team’s colors, fiery red and golden yellow. The effort put in over the season paid off in the form of a giant, confetti-dusted trophy that every Chief got to touch as it went on a victory lap around the field.
“I think my absolute favorite part was close to the beginning of the game, when four of the major players turned around so they were facing the wrong direction! Then, they turned back around for the snap! It distracted the 49ers just enough so that the Chiefs were able to have success in their play,” Miller said.
After 16 regular season games and several playoff skirmishes, football season has come to an end, and the Chiefs have taken top prize. For the first time in 50 years, the Kansas City Chiefs won the Super Bowl, a victory made even sweeter because it was Coach Andy Reid’s first ring as a head coach. Chiefs fans packed Union Station, the site of the official victory rally, to celebrate their heroes as the team rode by on a bright red bus with “World Champions” proudly painted on the side. Devotion to the game is what drives #15 more than shining accolades, however. As Patrick Mahomes once said, “I love being able to come in every single day and work out and watch film and practice with guys who are all striving for the same goal.”