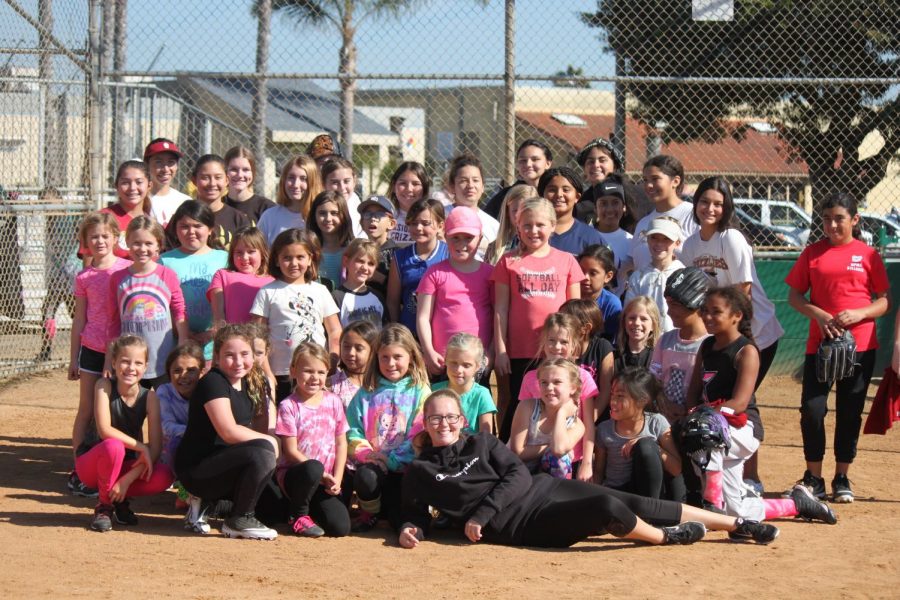 The team and kids share a picture after a day of progress, friendship, and fun!

On Saturday, Jan. 25, the Mission Hills High School softball team took a trip down to Bradley Park to help at the annual San Marcos Girls Softball clinic. This opportunity was amazing, not only for the volunteer hours, but because it helps younger athletes learn from experienced players they act as great role models.
“This is our seventh year in a row and wanting to give back to the community is a big part of it. It also helps promote softball within the community of San Marcos while simultaneously being a fundraiser for us so we can make a little money for our program,” Coach Franks said.
As the team taught the younger kids the fundamentals of softball, they started off the day with partner stretches, then throwing, and finally finishing off with batting and running. They are split into groups, which made it easier for Grizzlies to teach. The girls made it their job to make the day as exciting and fun as possible for the kids. Even some of the coaches were making kids laugh with their actions and jokes.
“For the littles we would do some dancing and in between we would listen to music. We would tell jokes and the same thing with the olders as well. We kinda messed around a little bit with the older kids just to make it a little more fun than serious. We told some jokes and played some revolving around the activities we did to make it a little more enjoyable because they were older. For the littles they love to have fun either way so it wasn’t really that difficult. With the dancing we would do silly dancing, we would do tiktok dancing sometimes too,” Dulce Brown (10) said.
The girls later went on to teach the 12-14 year olds similar activities again like fielding the ball and correcting their swing..
“It was more difficult to teach the littles because for most of the past the older girls had more of an idea of what they were doing already because some of them have already been playing for a couple years. Also, it was more difficult to coach the littles because sometimes they didn’t understand what they were doing and they had problems putting everything together, like when you throw you have to step as you let go of the ball and some of them had a lot of trouble with that. They couldn’t focus very well so a lot of them got hit but we came prepared with squishy softballs so that it wouldn’t get hurt,” Brooklynn Esposito (10) said.
At the end of the day the team was tired, but they were happy to help out at the clinic all the younger kids who are learning and going into softball.
“I felt good about teaching the kids and I knew I helped them a little bit and they really listened to my advice on hitting, catching, and running and everything. It felt good because it reminded me of when I was little and I was getting help, so it’s going to help them as they grow up and play softball,” Alani Acosta (10) said.