Nicole Rich is kicking to success 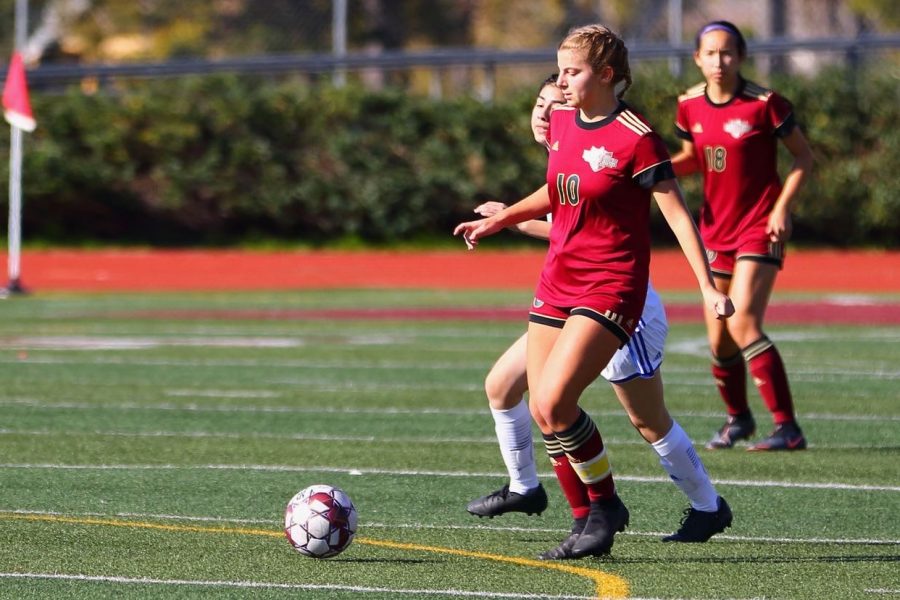 Nicole Rich (12) prepares to pass the ball off to her teammate in a game against Central High School.

With the new soccer season getting underway, Nicole Rich (12) is ready and eager to lead her team while she sports the captains armband for her last season. Rich plays center back and is a leader in the back line; her strengths include communication skills and a strong attitude. Having played soccer since she was three years old and being on varsity since she was a freshman, she knows what it takes to compete at the highest level possible.

“My coach puts a lot of responsibility on me to make sure that the team is bonded because he says that ‘If the team is really bonded, we will play better on the field,’ which I agree with. I also try to keep the team morale up at all times which isn’t that hard to do because my team is already very tight which is always super great to see,” Rich said.

Nicole Rich is a very busy person, taking multiple AP classes while playing soccer year-round. Rich is also involved in ASB at the school which makes her schedule even more packed because of all the school events that she has to run.

“Time management, even though I’m great at it. I have been on a tight schedule since I was a freshman, so I have just gotten used to it. It’s possible to take AP classes while being a student athlete, but you just have to be determined and can’t give up. I feel like as long as you really want what you are working for, you have to work through the pain and get to the finish line,” Rich said.

Rich started her club career playing soccer for San Marcos Revolution and is still playing for them nearly eight years later. Her family is the reason why she got into soccer and why she wants to grow as a player everyday.

“My dad was really the one that got me into soccer. He would always help me work on my skills and technique and I feel like it was a big step to where I am at, skill wise, today. My mom even played soccer when she was little so I can say that soccer runs in my family’s blood which I think is super cool. My family always make me want to get better at whatever I do which helps me stay focused on my goals,” Rich said.

Rich hopes the team will do well in the league and make playoffs this high school season. Rich dreams of attending a four-year university after high school and will try to continue playing soccer for as long as she can.

“I hope that at the end of the season, I can look back on all the memories that I made over the last four years. I still remember being a freshman getting to know how everything works in the program and now I am the one helping other players out whenever they need it. I wish that other players realize that four years really do fly by and to not take anything for granted,” Rich said.